The Fore Publishes a New Report: ‘A Kitemark for the Overlooked’ 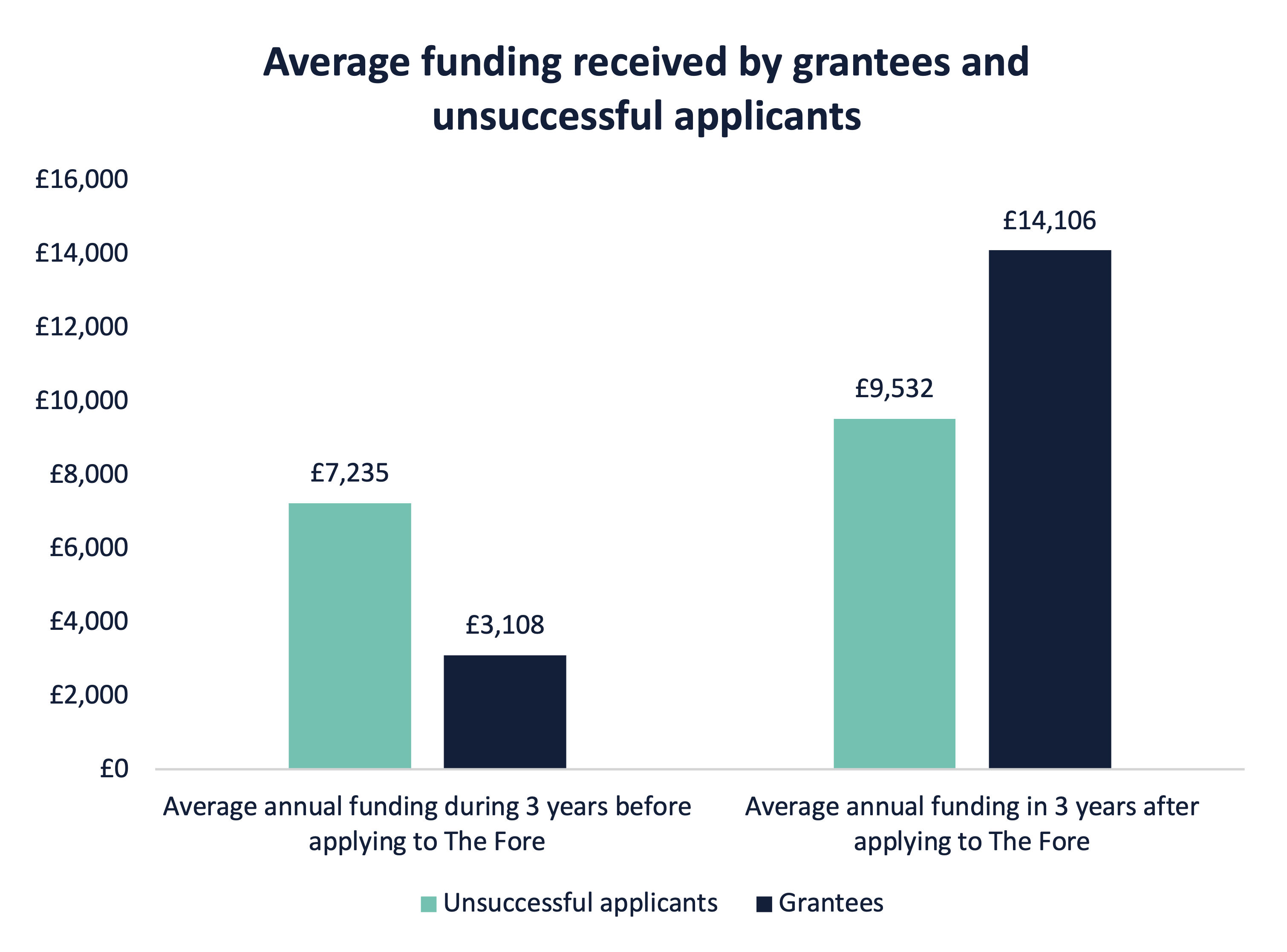 The UK’s seed funder for the charity sector shows that unrestricted funding and a trust-based funding model catalyses impact.

A report just published by the venture philanthropy fund, The Fore, adds significant weight to the argument that unrestricted funding creates greater impact.  Using 360Giving grant data, The Fore has shown that their grantees, who have all received unrestricted funding and skills support, have a grant income growth rate 6 times higher than that of unsuccessful applicants.[1]

Mary Rose Gunn, Founder and Chief Executive of The Fore said, “We are thrilled.  So many funders see providing unrestricted funding to small charities as risky but we hope this will encourage them to take another look.  Our grantees are unlocking significant extra funding from other trusts and foundations after one unrestricted grant from us.”

Since The Fore was founded in 2017 it has championed the importance of providing unrestricted funding and skills support to small charities and social enterprises as a driver of social innovation.  The first seed funder for the charity sector of its kind in the UK, The Fore advocates a trust-based funding model that breaks down barriers, supporting people and organisations that are making a real difference in their communities.  Since 2017 The Fore has provided £5.8m of critically needed seed funding and over 8,000 hours of skills support to develop non-profits working to address issues from knife crime to the environment to the mental health crisis.

The Fore is committed to measuring the impact of its work. Following on its 2019 research, the Fore is releasing a second report, A Kitemark for the Overlooked, which provides further evidence that The Fore is ‘ahead of the curve’. Drawing on data from 360Giving, this report ​compared the funding trajectories of Fore grantees to those of The Fore’s unsuccessful applicants.  It found that while unsuccessful applicants had higher incomes during the three years preceding their application to The Fore, in the three years after The Fore’s grant, the picture flipped: Fore grantees had much higher income growth (65%) than unsuccessful applicants (35%), and this was achieved by securing significantly larger grants.

Mary Rose Gunn commented, “We are keen to keep working on our research and to keep sharing our findings as openly as possible to help the funding community, but the credit for success lies 100% with our grantees, past and present.”

The Fore will continue to sponsor research into its programme, to better understand the relationship between its innovative grant-making approach and the incredible success its grantees have achieved. The Fore also hopes that other funders adopt similar approaches and will build upon this report, in order to create a culture of rigorous reporting and radical transparency in the sector.

For more details about these results, the study’s methodology, and the data these conclusions were drawn from, please download the report from The Fore’s website.

The Fore is a ground-breaking funder in the UK charity sector, catalysing fresh solutions to pressing social issues. The Fore’s venture capital-style approach to grant-funding and skills support has opened up access to finance and professional expertise for hundreds of innovative small charities and social enterprises. The Fore’s charity-led approach treats applicants as experts in social change, challenging the power imbalance of many traditional funding models and enabling organisations to apply for what they need most.

Since its inception in 2017, The Fore has made over £5.8m in grants and offered over 8,000 hours of professional expertise to portfolio charities solving issues from knife crime to childhood obesity, to social isolation, food poverty and homelessness. The Fore works with a wide range of partners including BlackRock, Moody’s, Rothschild & Co., UBS, LGT Vestra, Golden Bottle Trust, Postcode Local Trust, The Four Acre Trust, Garfield Weston, The National Lottery Community Fund, Power to Change, The Lovington Foundation and other family trusts and individuals. The Fore’s collaborative model pools skills and resources to enable funding partners to efficiently find, fund and support innovative grassroots organisations. For more information, please see The Fore’s website: https://www.thefore.org and Twitter feed: @theforetrust.

The Fore is part of The Bulldog Trust, registered charity 1123081.